So far we have been sourcing windbreak poles from companies which may have ceased to trade with unused warehouse stock, and we were lucky enough to acquire hundreds of unused 1950’s poles made from beechwood as part of the Blackpool Deckchair trove.

Trying to find new poles in this day and age, of the correct size and quality, is more difficult than one would imagine. No UK business that we contacted is geared up to this type of manufacture. Furthermore, any other poles readily available are made of unsustainable poor quality wood from dubious Oriental sources.

When we asked our Indonesian suppliers if they could make new poles for us with the same high spec as our other furniture, the price quoted was not a viable option. However, they came up with a surprising alternative…

They have sourced some ready made vintage poles made of a strong native wood. Featuring surprising quality and endurance, together with the additional bonus of being the correct width and length. They just need a point carving at the end (like a large pencil sharpener) BUT they have paint along the length, in bold horizontal red and white stripes!!

Perfect Poles for The Stripes Company

It transpires that they are used for Indonesian Independence Day celebrations each year. Although they offered to strip the paint off, we think that in the spirit of the Stripes Company, it is a perfect fit for us to leave the stripes intact.

These come with such a lovely history – please read the story as told to us by our lovely suppliers – we are sure that you will agree that it is a great provenance for our windbreak poles. So we bought the lot!!

“Every August each year we are remembering the struggle and sacrification of our national heroes in fighting for our national independence.

There are usually celebrations and parades on the street, performing arts and cultural attractions where the boy scouts and students take part.

The Red and White colours have a very long history.

It is the triumph color of the ancient kingdom named Majapahit. This is once ruling the regions from the Nusantara archipelago until Singapore, and some parts of Malaysia and Cambodia.
This ancient kingdom is located in East Java. They were the biggest and strongest kingdom in Indonesia’s history, even in Southeast Asia.
At that time the archipelago hadn’t been named Indonesia yet but it is Nusantara that means archipelagos.

The Red and White colours then became the legacy or sign of the power of the kingdoms ruling the Nusantara after Majapahit falls, until Indonesia became a republic.
With the spirit of the greatest kingdom, our founding fathers decided to use the Red and White colors as our national flag.

The Flag was first fluttered on the 17th of August 1945 in an independence proclamation event in Jakarta which marks Indonesia’s Independence Day”.

We will now be using these fabulous poles when we make our 4 pole, 5 pole or 6 windbreaks. Available in a variety of our brightly striped fabrics that look wonderful on the Beach or in the Garden.

Each windbreak has a handy pocket (2 on a 6 pole) and a storage/carry bag in matching stripes. 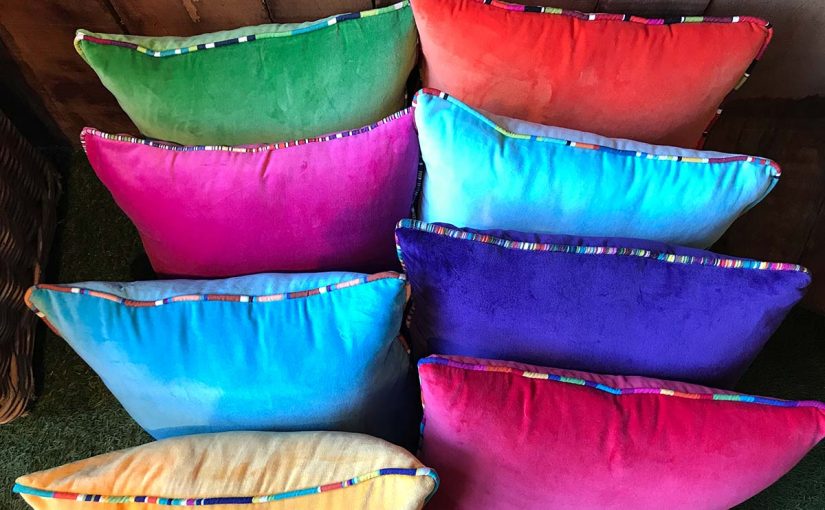 With Our New Velvet and Stripes Soft Furnishing Collection

At the time when Scarlett O’Hara had the notion to tear down the green curtains at Tara to make a beautiful dress in the iconic ‘Gone With The Wind’, velvet was considered to be the height of luxury and wealth. With her new finery, she was hoping to give her intended beau, Rhett Butler, the impression of survival against the odds, and ultimately succeed in the face of impending doom as the American Civil war took hold.

Hopefully, better days are on the horizon for us also, but velvet adds a very comforting touch in uncertain times – especially with the change of season from Summer into Autumn and Winter.

The Stripes Company are now offering a new range of soft cotton velvets in bright jewel colours to mix with our popular Interior Stripe Fabrics, which together make stunning combinations for cushions, bags and throws.

Because there as so many possible combinations, we are leaving it up to our customers to decide which colour options to choose and add embellishments using any of our fabulous trims or piping.
Furthermore we guarantee that they are a million miles away from Scarlett’s dowdy greens with matching tie backs and will leave customers to rattle their own pelmets (so to speak)!.

Made to Measure – in House Stitchers

There are some ideas on the website, which you can buy in the combinations and sizes shown. But if you wish to have them made in your own choice of sizes and colours, please contact us with your requirements and ideas, and our in-house stitchers will make especially for you.

Tie on Headrests for Deckchairs

For ultimate comfort our headrests for deckchairs are the perfect addition to your deck chair or steamer chair. Made in any of our deckchair canvas fabrics, they are trimmed with coordinating pompom fringe. With ties to attach them to your chair, you will enjoy real comfort sitting on the beach or in your garden. 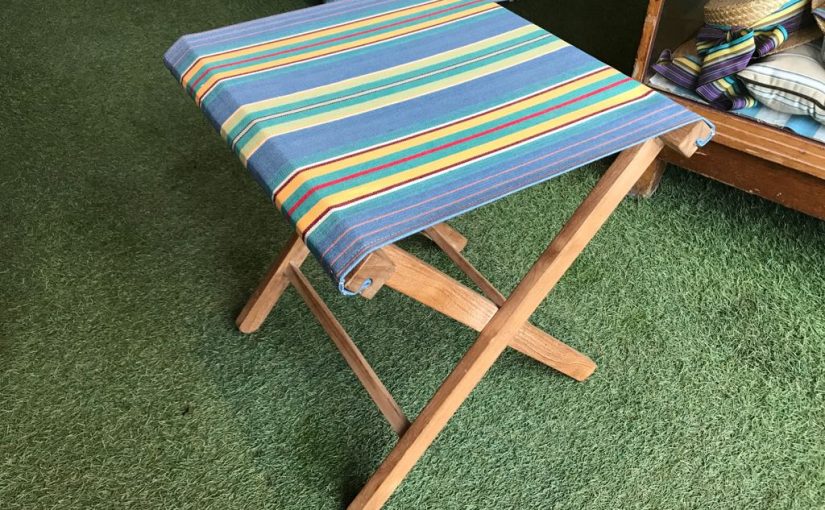 Made in grade A Teak each folding wooden stool is lightweight, easy to carry, stores flat, so takes up little room in a cupboard or boot of the car.

Hence they are ideal for taking with you to outdoor events, picnics, festivals, camping, when you want to sit down or rest for a short while.
We are offering them with seats made up in any of our deckchair canvas range. The seat is easily replaced / removable using a dowelling system. 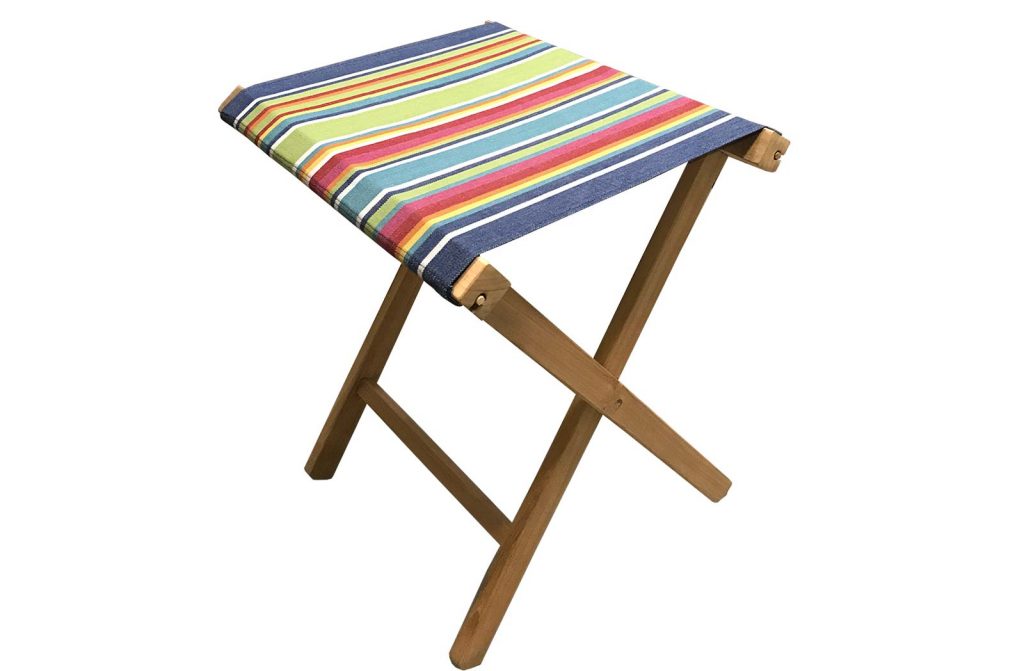 striped folding wooden stoolsWe also have plain fabrics for those of you who prefer a more traditional folding stool, in dark green, red, blue, black, orange or cream for that matter.

These sturdy folding stools are made from beautiful warm coloured Teak hardwood. Remember old fashioned folding wood stools before the advent of aluminium and plastic? Yes?

Our teak wooden stools are faithful replicas but brought up to date covered in a range of  jazzy, bright stripes! 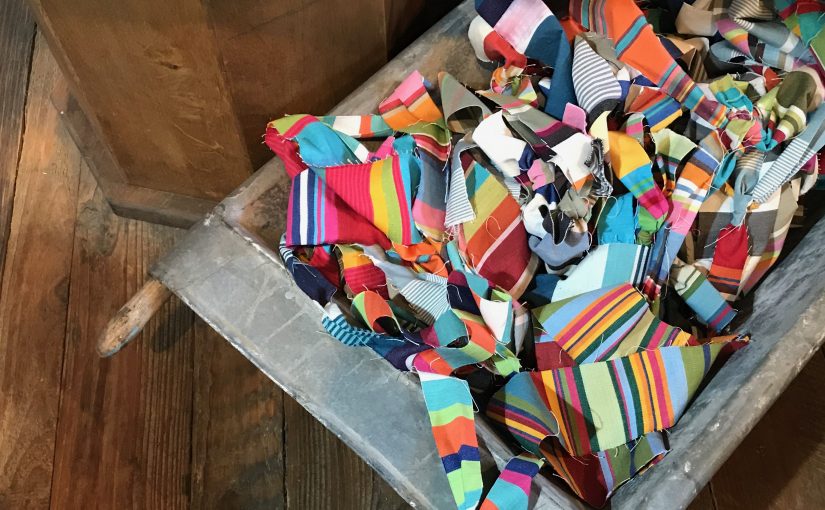 There are ethical responsibilities involved in running any business. Therefore since 2006 when our first fabric designs arrived wrapped in hessian bales and cardboard boxes, we knew that we would have to address the issue of waste management and formed an immediate policy.

Managing what we throw away has remained a top priority for us. Long before the current focus on plastics recycling and disposal we were making a conscious effort to work towards a zero waste policy here at our Chester factory. Now, having always seriously addressed the issues of waste we can honestly say that we have none!

In addition to waste management we are extremely careful with what we bring in to the factory. All our racking, display casing and furniture is upcycled, rescued and given a new life with us. Our computers and tools are bought second hand and our showroom is built almost entirely from reclaimed and salvaged materials. Our kitchen doesn’t even have a bin, everything is either washed on site or taken home by staff to encourage the use of repeat use containers.

Here are our policies laid out in full. We hope this encourages and gives ideas to everyone, especially businesses like ours to help reduce the waste they produce. Great for saving money and the planet! 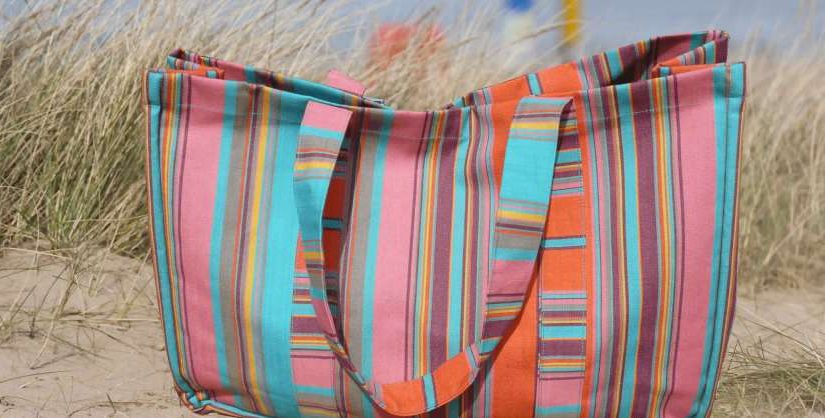 Our customers are always telling us how much they can fit into our Extra Large Beach Bags, often not just when going to the beach!

Here at The Stripes Company we have know this for years, having used these super handy bags for all kinds things including weekends away, packing for the kids, going to the gym or doing the grocery shop! And they never let us down. They are strong, water resistant, hold TONNES and (even if we do say so ourselves) they also look great!

To put these claims to the test we decided to load them up for various situations and see how much we can fit in them – and they didn’t disappoint! See the results on the videos below, and a big thanks to our own Sally for happily packing and unpacking to put these bags to the tests!

And we couldn’t forget actually going to the beach!

Have a Stylish Halloween with Stripes from The Stripes Company

To celebrate Halloween has become much popular in the UK in recent years, with halloween costumes for children at an all time high.

But it is in the Halloween Decor department that The Stripes Company comes to the fore.

In addition to our striped fabrics in delicious oranges and scary black & white, we have fabric trimmings to coordinate.

Create an exciting backdrop for your halloween party with our striped fabrics together with striped cushions which are all in bold  & beautiful stripes (checks & plains too).

Also with pompom bobble fringes and striped webbing, seen in the main image as a border across the backdrop of our Jousting orange and white stripe fabric

Most importantly we mustn’t forget a pumpkin! Because halloween isn’t halloween without one sitting on a teak directors chair, covered in Jousting orange and white stripe deck chair fabric!

This picture explains it all 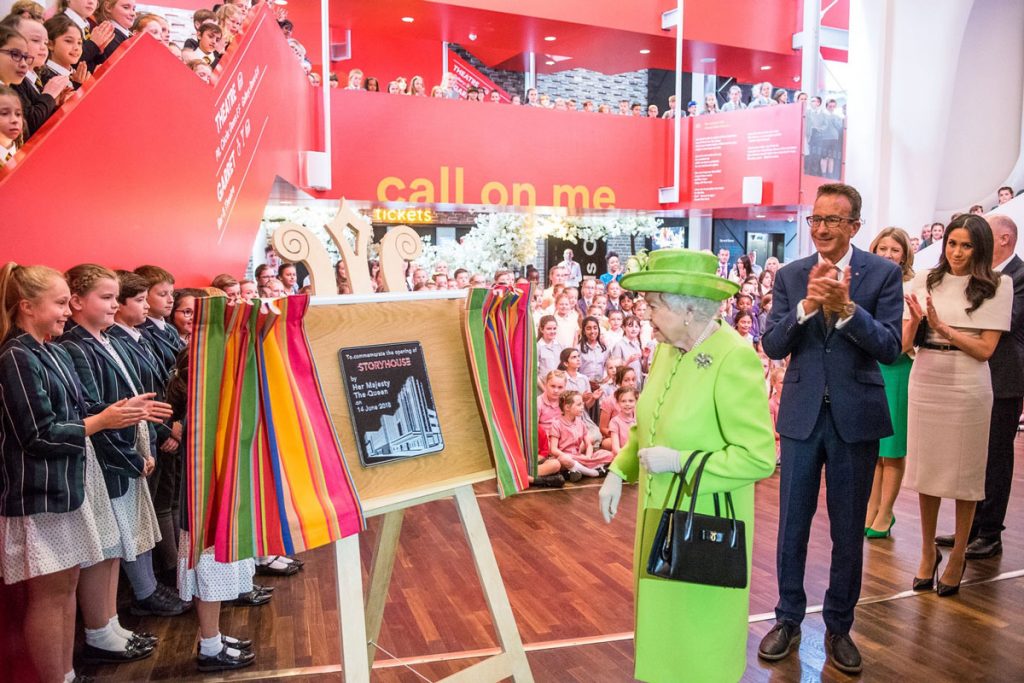 One of our brand new striped fabrics was chosen by @Storyhouse Chester for their official opening ceremony by Her Majesty The Queen and The Duchess of Sussex on June 14th 2018.

Our striped fabric ‘Origami’ was made into curtains which The Queen opened to reveal the plaque commemorating her visit.

We would like to thank Storyhouse very much for choosing our fabric, it is perfect with the colour scheme there. 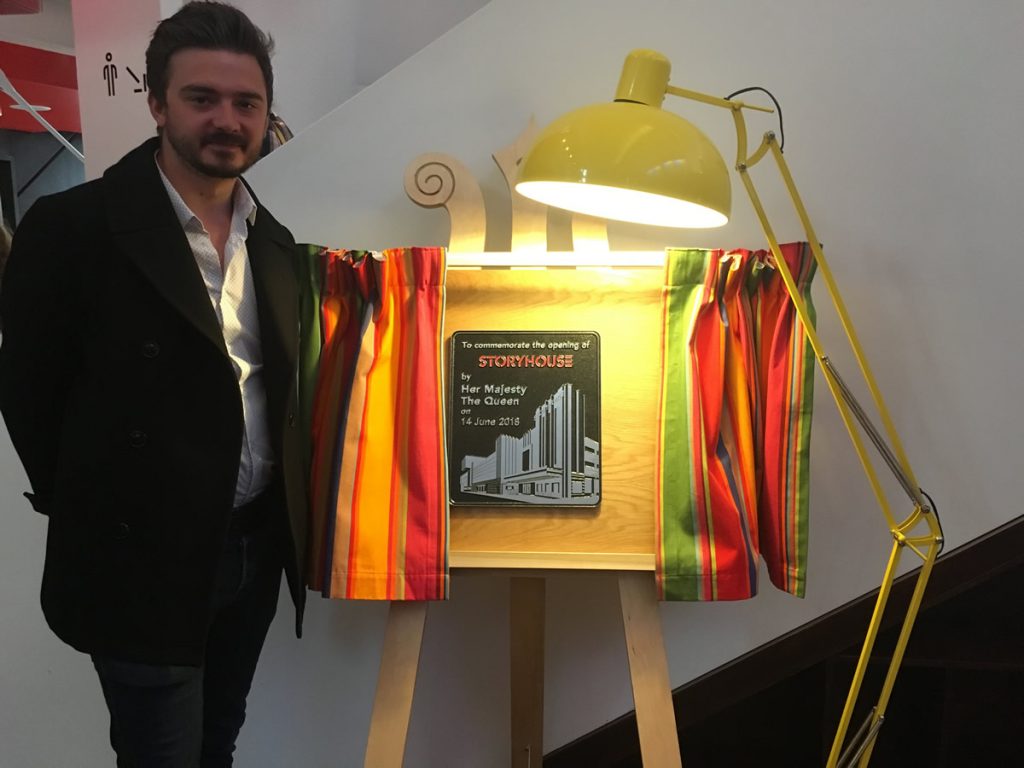 STRIPES ON TOUR Dates for 2018

See us at a whole host of shows and events this year. We are excited to be exhibiting at the following:

Lookout for the Brightest Stripiest Stand and come and say Hello to Dan!

Won’t be able to make it to any of The Stripes Company shows 2018? Visit us online at www.thestripescompany.com or visit our Fabric Factory Outlet Shop near Chester 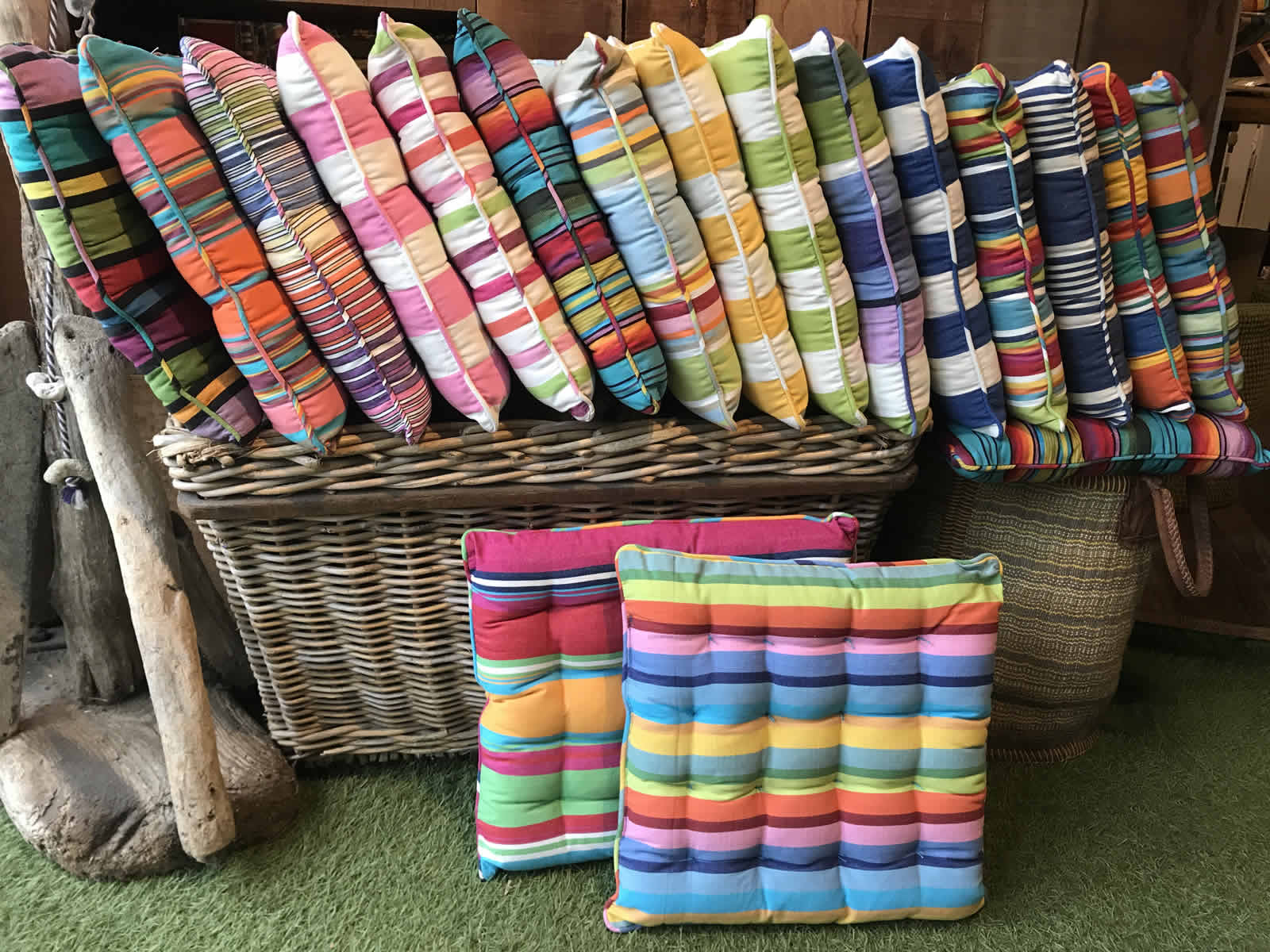 The Stripes Company stripy seat pads with piping are bright, fun seat pads ideal for kitchen, conservatory or garden chairs.
These lovely stripe seat pads have matching piping all around the edge and 16 knots across the surface of each cushion.
We make them in a choice of 18 stripy patterns from our 100% cotton fabric range. The stripes may vary from the images as it depends on where the pattern is cut on the fabric.

Each stripy seat pad measures approx : 40 cms x 40 cms seam to seam across the cushion and is approx 7cm deep

You can mix and match or choose different colours, which ever takes your fancy!